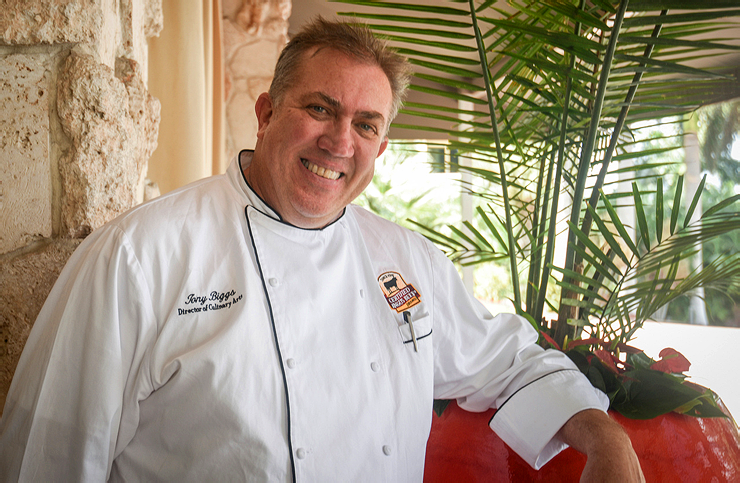 A cook takes on many jobs to gain the experience needed to be called a chef. A true chef can parachute into any insane kitchen operation and come out smelling like a warm Grand Mariner soufflé. It’s a combination of lifestyle and food experiences. This is a chapter out of Tony Biggs’ life story.

I was on vacation in Aberdeen, Scotland …

… and decided I didn’t want to leave. I loved the unadulterated fresh vegetables and cream I could get daily from the local market. I could smell the fresh baked breads from blocks away. The Scottish salmon swimming through the locks made my culinary senses quiver.

So my friend, Bill Blakeman, arranged a job interview with a company that caters to oil rigs. That Monday I went down for an interview with a 6’7″ Texan who wore a rattlesnake belt, alligator boots and oversized sunglasses. At this point I had no idea what I was getting myself into.

The Texan asked me if I could cook, I said of course, and that was the end of the interview. He instructed me to be at the airport by Monday morning. (Keep in mind, this was during a time when three million British citizens were out of work, and I was taking one of their jobs.) We would fly from Aberdeen to Stavanger, Norway. From there we would take a survival helicopter up the coast of Norway to the Arctic Circle. You can only live 15 minutes in the North Sea, and that’s with a survival suit on if the chopper should go down. On the way to the rig we could see Russian submarines plowing through the fjords.

My first couple of days were traumatizing. It was like a small city on the sea. I would ask myself what the heck am I doing here? I have done some crazy things in my life, but this had to be the topper. I was 23 years-old, in the middle of the freaking North Sea with ultra-hairy Scots from the Shetlands — not to mention the Godzilla-style icebergs. 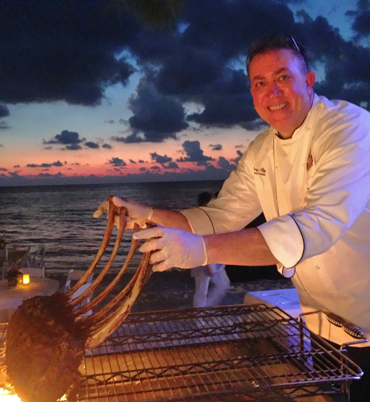 I almost got fired during my first couple of days when I was asked to come to the tool pusher’s (general manager of the rig) office. He asked me if I liked my job and if I wanted to continue on working. Of course I did! He said then I had to change my cooking style. I didn’t understand what he meant. He asked me what I did to the porridge yesterday. I told him I made it the way that I like it — brown sugar, cream, raisins, the kitchen sink. He said don’t you know where you are son? These men only like their porridge with water and salt. My actions almost created a mutiny throughout the rig. I immediately took note of whom I was cooking for, and made the necessary adjustments.

From there it was smooth sailing. I paid attention to their culinary likes and dislikes. I survived almost two years on the rig, experiencing horrifying dive stories, tales of fingers mutilated by equipment, and devastating North Sea storms. Some nights were so rough the rig would sway back and forth in the winds. Thankfully, the kitchen was very well secured, or else it would have been a flying cake circus.

Unfortunately, food supplies came in the middle of the night. I always picked the wrong shifts and would be working when we needed to gather the food. It was terrible. We’d have to be on standby, waiting for the tugboat in devastating subzero temperatures, then walk 15 flights of icy-cold steel with cases and cases of food. A benefit of the job was there were no food costs. I could prepare anything I wanted, as long as it suited the riggers’ taste requirements. Some mornings we would have crepes Suzette, fresh fish or steak, and poached eggs with Hollandaise sauce.

During my adventures at sea, I learned simple home-style European dishes like shepherd’s pie, and steak and kidney pie, which went over very well with the Scots and Brits.

My shift work was two weeks on, two weeks off. I always had anxiety attacks close to the end of my shift because I didn’t know if my replacement would be on the chopper. If he wasn’t, I would have to work another 2 week shift. When he would walk through those steel doors of the rig, I wanted to kiss him! When the shift was over, we would fly back to Aberdeen. The Shetland boys would drag me into the nearest pub. You see, there was no drinking during time at sea.

Chef Tony learned a lot on the rig. His most important tip — whether you’re cooking on an oil rig in the middle of the ocean or in the confines of your own home: know you’re audience and respect different cultures …

You may be the best cook in the kitchen, but if you don’t understand what your guests want, it doesn’t matter.