Food, glorious food. We all rely upon it as a source of nourishment. But beyond that, it represents discoveries, connections and memories. In many ways, it can shape who we are, how we view the world, and how we live. It’s central to our stories, sometimes in ways we don’t expect.

The power of food, in all its forms, is central to the story of Chef Jeff Henderson. Born in South Central L.A., Jeff and his sister grew up in poverty. They didn’t have a relationship with their father, who left when Jeff was only two. Their mother worked hard to provide for them, but as he recalls, they never gathered around the dinner table as a family. No one was there to greet him in morning, or tell him they were proud of him. There was never a bowl of fruit on the table.

The kid with Coke-bottle glasses was hungry, and a dreamer. He went to school, but he didn’t get much out of it. His teachers couldn’t connect how the education they were trying to provide would help him achieve those dreams: of a house on a hill, with a fence around the yard, a fridge full of groceries, and a Maytag washing machine for his mom. So he turned to the streets, to the young men who found “success” selling drugs.

Jeff approached the endeavor with the intelligence, hustle, drive and creativity of a great businessman. As clean as they come, he never participated in the lifestyle himself, but established his own brand. Developed his marketing skills. Figured out the logistics. Managed his team. But he ended up serving 10 years in federal prison anyway.

It was there, he said, where everything changed.

“Prison saved my life. I found my sense of identity,” he explains. “You have that defining moment when you look in the mirror and you ask, ‘Who am I? What is my gift?'” 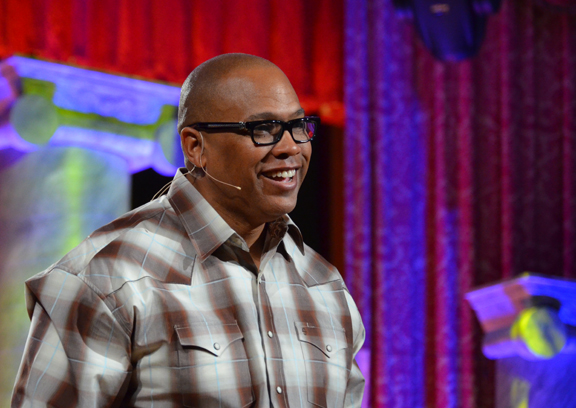 Thanks to the leadership and guidance from some older inmates, who encouraged him for the first time in his life, Jeff found his calling in the kitchen. He emulated those he admired. He read, he studied the world and he figured out how to translate his gifts into success. Yes, it took a lot of hard work and focus and investment in himself. But he did it.

“Become a student and the money will come,” he noted. “Pay comes in many forms.”

He worked his way through the culinary ranks, eventually leading the prestigious kitchens at Las Vegas’ Bellagio hotel.

Today, he’s a best-selling author. A “celebrity” chef with his own Food Network show. He’s got the house on the hill and four – count ’em, 4! – fridges full of good food. But, as he told the guests assembled for the Certified Angus Beef ® brand’s Annual Conference, his biggest accomplishments are different. He mentors troubled youth, encouraging them to find their purpose and using tough love as necessary to help them reach their potential.

And, he’s the kind of father to his five children that he never had: always there to say “good morning,” “good night,” and “I’m proud of you” as they gather around the table.