Guys, let’s face it.When it comes to marriage, try as we may, we generally receive FAR more than we ever give.

That’s not to say we don’t have valid reasons for it, though. Your neighbor can’t be expected to drink that beer around his backyard fire all by himself. How can the Browns possibly win this Sunday if you’re not there to support them?And boy, 6:30 in the morning comes around pretty quick, so you need that early bedtime to make sure you’re at peak performance for the daily grind.

Sometimes women just don’t understand what we’re up against. But that’s not to say there aren’t times when we should go above and beyond for our better looking (and smelling) halves. So write this down.

On Sunday, while my wife was enjoying a well-deserved respite in our newly tranquil bedroom, I tossed the kids in the car and headed to our crazy awesome local grocery store, Buehler’s Fresh Foods. In our house, fall means roasting time — and there’s nothing like a slow-cooked chuck roast to make the house smell like October. And the beauty of making a chuck roast? It’s 10 minutes worth of work, 4 hours worth of wait. Hello Browns game!

Stick with me — I know guys don’t read instructions well, so I’ll include lots of photos and you can just kinda fudge it from there. 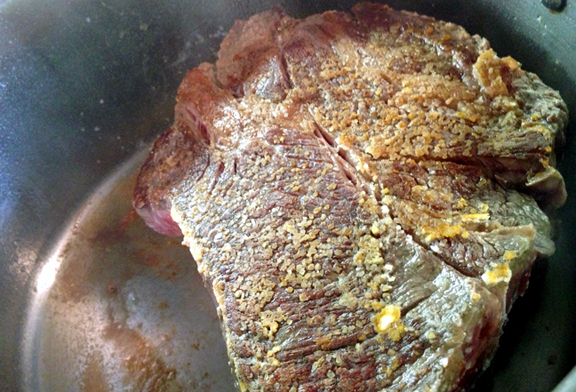 Step 2: Season … liberally. Seriously. Think drum-circle-at-Starbucks liberal. That’s what I’m talking about. All you need is kosher salt and pepper — and a lot of it. Put a little oil (cooking, not motor) on the meat to make sure the salt and pepper stick, and then go nuts on that hunk of beef. 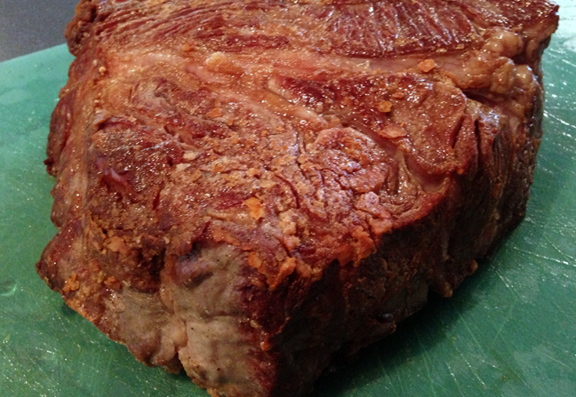 Step C: Sear it like you stole it. Get a nice deep cooking pan, drop a bit of oil (again, cooking oil) in the bottom of it, make sure it’s hotter than that can of High Life you forgot on the roof of your car last July, and then apply meat. As soon as it hits the bottom of the pan, you should hear the sizzle.

If you listen closely, it sounds like a million little fans packed into a stadium cheering you on (Sear-it! Sear-it! Sear-it!). Let it go until you’ve got a nice brown crust on the bottom side, then flip it until you’ve got that crust all the way around it. Once you’ve completed this step, remove it from the pan and set it aside. We’ll deal with it later.

Step Seven: Deglaze. Since you’re probably drinking something already anyway, you know the value of your beer. If you drink good beer, it has a higher calling (like filtering down your esophagus). If you drink cheap beer, go ahead and dump it in. Better yet, don’t sacrifice ANY beer. Use apple cider, which will sweeten your end product and make your wife think you’re inventive.  Either liquid will actually loosen those little bits of meat that were sticking to the bottom of the pan. Those are crazy delicious, and impart flavor into the final dish. 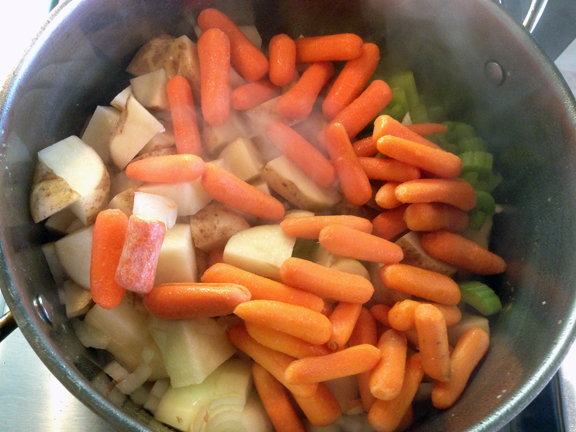 Step Omega: If it was just you eating this dish, I’d say cook it off and give yourself a pat on the back. But since it’s for her, you need vegetables. I chose potatoes, celery, onion and carrot. Most important to know — you need to chop these up into smaller pieces. But, do make life easier on yourself and buy baby carrots (no cutting required). There’s a large group of America’s baby-carrot-cutting work force that’ll thank you.

Once cut, drop in the pan that’s still sizzling. Let them go for a little bit. The heat will caramelize the outside of the vegetables and make them less vegetable-like, which we all benefit from.

Step 38: Still with me? Good. Now take that gargantuan, perfectly-seared piece of meat and place it back in the pan. Add a bit more of your deglazing liquid, a little beef stock and any tomato-based ingredient you can think of. Hello, ketchup. (Tomato paste works fine, too.) Fill your pan with beef stock until liquid is nearly halfway up the side of the meat.

Step huh? Oh ya, one thing I forgot. Have your oven preheated to about 225 (well played, those of you who read ahead). Put a lid over the meat and vegetables, and load it into the oven (Note: make sure it’s an oven-safe pan and lid!). Set your clock for four hours and go take a nap. You deserve it. In a few hours, you’ll be treating your overworked, under-appreciated wife to a meal that’ll keep you in her good graces for awhile — at least until you do something else stupid. 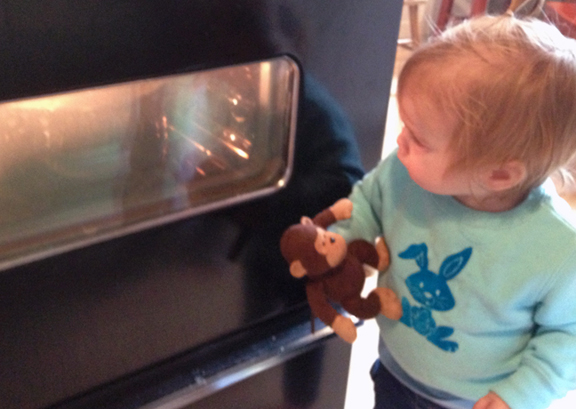 Last tip: Remember that liquid you used to deglaze the pan? By now it tastes like a cross between steak and heaven. Take out the meat and strain the vegetables so that all you have left is that succulent meat-beer/cider-stock juice. Put it back on the stove and add just a touch of flour to thicken it. Whisk until all the lumps are gone. Then have a taste. 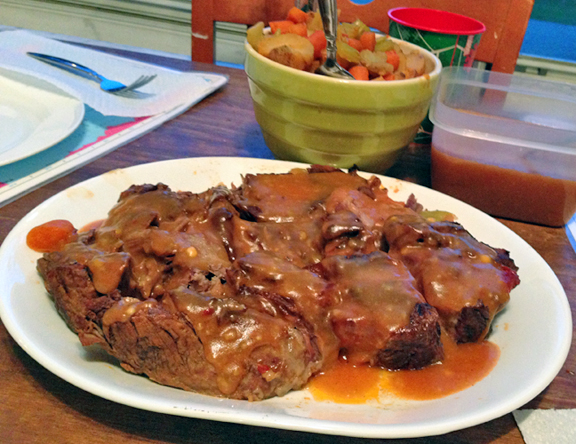 Next time you’re not exactly in your wife’s good graces, pull this recipe out. She’s sure to forget the fact that you haven’t changed your daughter’s diaper in 15 hours.