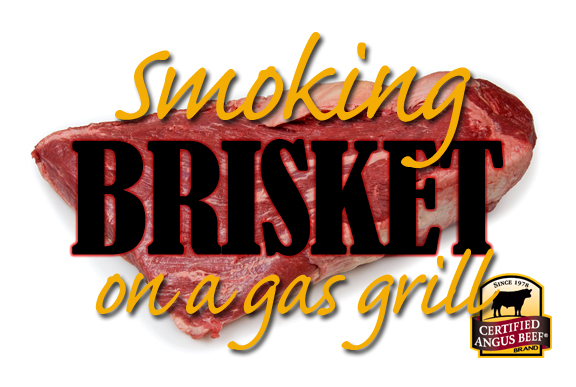 I’m by no means a professional chef, but — as the saying goes — I like to play one on TV. (Or something to that effect, given that I’ve yet to land that elusive starring role on the Food Network.) What I’m trying to say is I fancy myself a pretty good home cook, and love to experiment in the kitchen. Thanks to my role on the Certified Angus Beef ® team, many of my creations involve beef. I’ve braised short ribs and simmered stews, seared steaks, grilled burgers, roasted prime ribs, stir-fried sirloin, mixed meatballs (and meatloaves) and stuffed roulades. But there was one bovine frontier I had yet to cross … I’d never smoked a brisket.

I LOVE barbecue! Real barbecue, smoked “low and slow” over fragrant wood, infusing the meat with its inimitable essence, rendering it tender and juicy and … [contented sigh].I’d just always left it up to the experts before. I think I was suffering from a major confidence problem, talking myself out of it every time the idea dared to present itself.

Whoa, whoa, whoa. What? Was I really going to let a little stinkin’ thinkin’ get in between me and a giant slab of delectable brisket — and placing an important check mark on my culinary bucket list?

Brisket is a fairly economical cut. Even if I screwed it up irrevocably, it wasn’t going to be a break-the-bank endeavor. So, with my game face on, I invited a group of about 10 family members over for a late-summer brisket dinner. If they were nervous about my chances for success, they were kind enough to keep it to themselves. They seemed thrilled! (In retrospect, it could have been the brisket, or it could have been the margaritas I promised. Either way.)

I wanted to serve dinner around 6 or 6:30, so I knew I’d want to get the brisket going early in the morning. I estimated 12 hours, so I set my alarm for 5 a.m. on a Saturday morning, allowing a little wiggle room. That’s dedication, folks. As it turned out, I got next to no sleep the night before. I couldn’t decide if I was full of excitement, like a kid waiting for Santa on Christmas, or if it was nerves. Or maybe both. Needless to say, 5 o’clock came earrrrrrrrrrrrly. 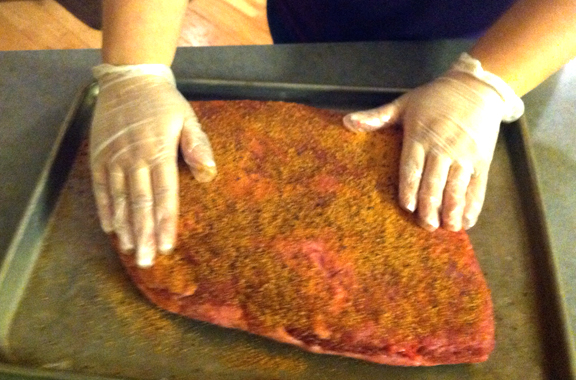 I’d seasoned and refrigerated my brisket the night before, with a mix of salt, pepper and a few other “secret” seasonings. All right, garlic powder, onion powder, paprika and cumin. (Don’t ask me the exact recipe, I just threw some stuff in a bowl. Mostly salt and pepper.) I’d also soaked my wood chips in water all night, so they’d gently smoke and not burn.
After I got my smoker box ready — a handy little metal contraption perforated with holes which allows the wood chips to release their magic once they heat up — I went out to light the grill. 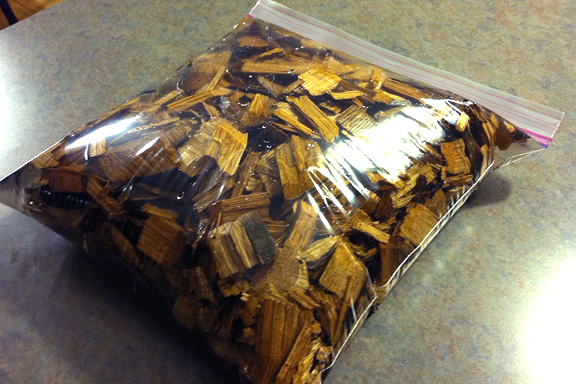 And, wouldn’t you know, it wouldn’t light. “%&*$%@(!%#%@$#!!!!,” I thought. Or maybe I even said it aloud. I was the only one up at that hour to know for sure. It wasn’t the propane — we’d just changed the tank a few nights earlier. After several tries, I still couldn’t get it going, so my only option was to go back in, gently wake up the hubby, and sheepishly request he come take a look at it. 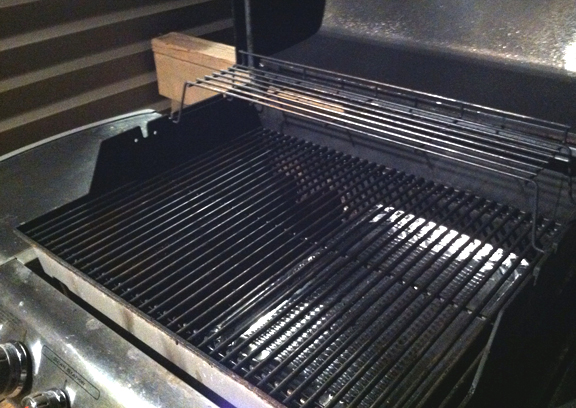 Have I ever mentioned that my husband is a saint? Because he is. He got up at 5:20 a.m. on a Saturday morning and saved the day. (Turned out the grill’s ignitor is battery-powered, and needed a new one.) My hero! I have a gas grill, not a true smoker, so my plan was to use only one burner to heat the metal box of wood chips. The brisket was placed on the unlit portion of the grill, with the gentle smoked heat circulating around it. Everything in place, I walked away feeling good — and hungry already. 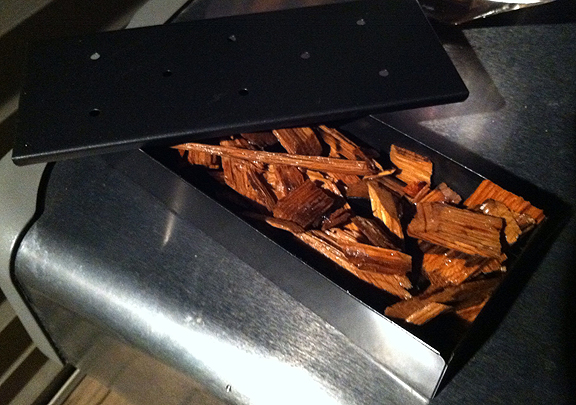 When I went back to check about 30 minutes later, however, I was concerned. The one burner was putting out gentle heat, as planned, but there was no smoke. I realized that while the temperature was where it needed to be — right around 250°F — I needed to get the wood closer to the heat. I lifted the grill grate and put the box directly on the burner shields. Which was a great idea, except the narrow, rectangular box wasn’t balancing very well. Thinking quickly, I found a larger aluminum pan, put the chips inside, and covered it with a (previously unused) broiler pan insert for my toaster oven. Although I was pretty impressed with my on-the-fly MacGyver-like ingenuity, I realized I could have also covered the pan with foil and poked a few holes in it. 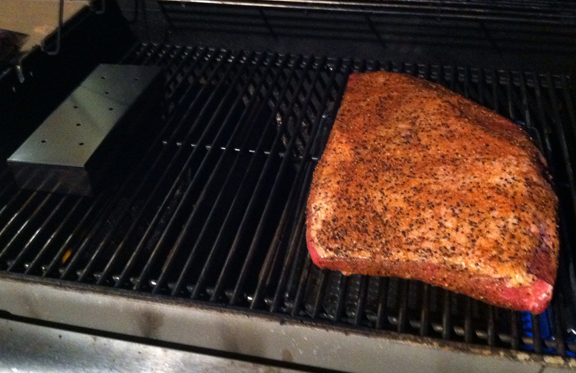 The re-engineered system in place, I went back inside and hoped for the best. After another half-hour, I nervously went outside to check, thinking, “What’s the worst that can happen? We can always order pizza…”

Fortunately, my fears were unfounded. The temperature was holding steady at 250°F, gentle curls of smoke were wafting from the box, and Mr. Brisket was looking mighty delicious already. I breathed easy for the first time in hours. This might just work after all …

Fast forward 10 hours: Like an anxious mama, I had hovered nearby, ready in the event of a problem, but none arose. I had time that day to do some laundry. Make a ton of side dishes. And, yes, even take a little nap. It’s amazing what you can accomplish when you actually stay at home for hours at a time, which my experiment also required me to do. Apart from periodic checks on temperature, and adding more wood chips to the box, it took care of itself. 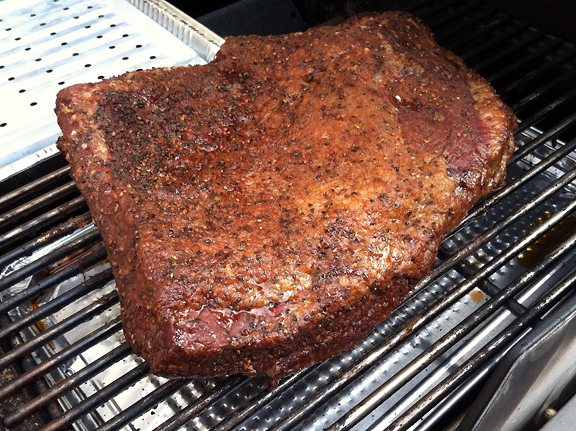 The moment of truth: After I took Beefy McBrisketson off the grill, I covered him in foil and let him rest about 25 minutes. Then I sharpened my knife, took a deep breath, and began. “Slices good,” I thought. “Smells good. Looks good.” By the time I got around to serving myself a plate, the reviews had started to come in from the group. The crowd was pleased! (Or very polite.) But I have to say, I too was pleasantly surprised. Flavorful, juicy and tender, the brisket had indeed picked up that wonderful smoked essence — the perfect complement to the naturally robust beef taste.

Will I go on to enter my brisket in the next barbecue competition? Never say never, but no, probably not. I think my first attempt was good, but I’m pretty sure that with more practice I could do better. Next time, I’ll start earlier (yikes) and let it smoke longer, making it even more tender. I think I can tinker with the seasoning — there was a tiny bit too much pepper for my liking, although it did help create a wonderful savory crust. And while I was pleased with my ability to adapt the gas grill for this technique, the BBQ pros are definitely onto something with their dedicated smokers. 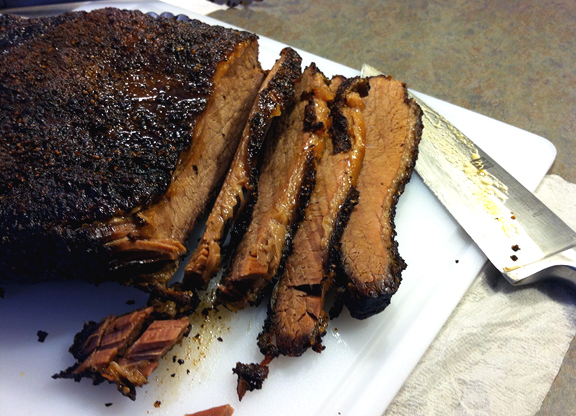 All in all? I’d consider it a success, and another culinary goal successfully achieved. Will I try it again? You bet!

Maybe I should start resting up now …

Here are a few of our favorite brisket recipes.

5 thoughts on “For the love of brisket”