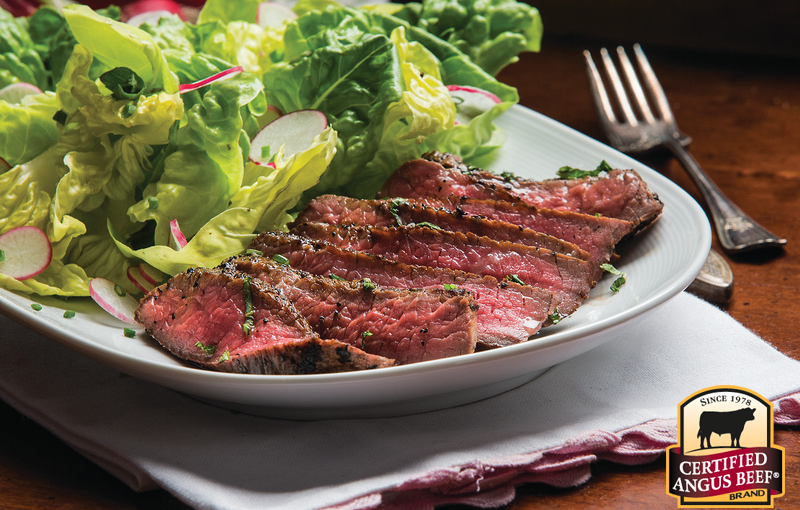 In this conclusion to Chef Ashley Pado’s experience on Food Network’s Cutthroat Kitchen, she recounts the thrill of each round, the horrors of sabotage, and the challenges of culinary competition. Read the rest of her story here and here. 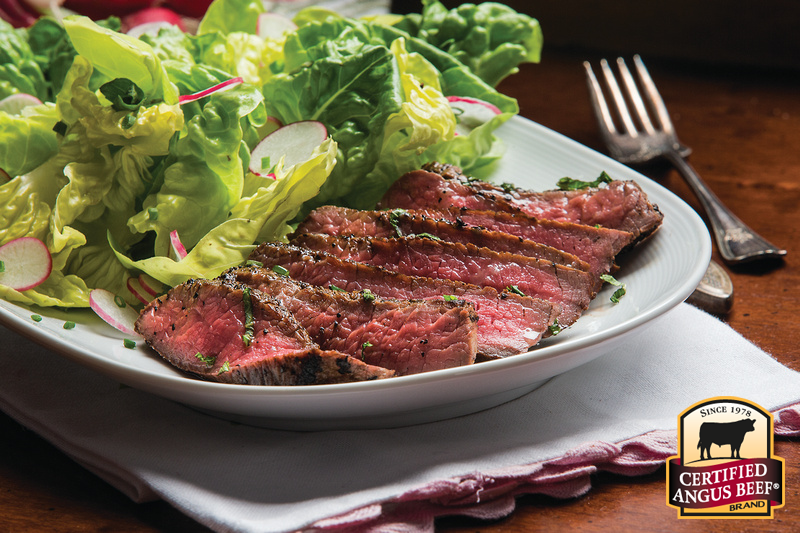 No great story ever started or ended with “leafy greens” anyway …
When I heard “Southwest Salad” I never once envisioned a giant plate of lettuce! But we will get to that. Let me explain what goes on in your head when you attempt to be ‘cutthroat’, yet thorough. I was extremely tuned in to my culinary basics, like my mise en place. I was focused on being organized and fast! Cutthroat Kitchen is about sabotaging your opponents and making them fear you! You bid on specific sabotages and hand them out like candy if you rank biggest bidder. The goal is to make that chef sweat. You want to throw them off their game. If you haven’t ever needed to have ‘game face’, this would be the time! Walk in with confidence and show the other competitors who to fear, that was my strategy. Once learning I was up against all guys, I was even MORE fired up and confident. I knew I would quickly become the underdog being the only girl.

I was ready for anything and my knives were sharp!
When Chef Alton announced the first dish — Breakfast Hash — my mind went immediately to Shreve, Ohio. It’s my hometown. Breakfast hash is a basic recipe I grew up eating, so I knew I had this one in the bag. I ran into that pantry and just started grabbing! Onions, potatoes, garlic, sausage, eggs and for some reason, a head of cauliflower?! I felt safe once back at my station and calmly awaited the dreaded sabotaging to begin. My strategy? Envision myself using the specific sabotage. If I felt I could pull it off, I wouldn’t bid. If you start bidding on sabotages it shows weakness! I wasn’t going to put my neck out there that soon into the game. I was quiet at first, and it hosed me. The first sabotage was a bowl of bananas, cooked oatmeal and corn flakes. Whichever chef was to outbid the others got to pass out each additional ingredient to the remaining chefs. I was praying for anything but the bananas!

I felt it in my bones that those boys were going to just demolish me with sabotages! I was the only girl and from what I could see, they were intimidated. I talked about my position at the Certified Angus Beef ® brand headquarters and filled the other chefs in on what exactly I do. Females who cut meat are pretty hardcore and they quickly found that out!

I was obviously a target for Chef Jovens. Right off the bat he gave me bananas in place of potatoes. My first thoughts? How am I supposed to hide the taste of sweet banana in my savory breakfast hash? I looked at that bowl of bananas with disgust and instantly wished I would have bid against him! Second up was a pan that would be used to do all of your cooking, and it was in the shape of a hashtag. Yes, a hashtag. The social media icon was going to become someone’s complete heat source. The bidding started and I fell short, once again. Chef Jovens was again out for blood and walked that happy little hashtag pan over to ME. I looked at the pan and estimated it offered about four inches of total of actual cooking surface! I wasn’t scared of it, I was fired up!

If this is how these guys want to play, bring it on!
Halfway into the first round I decided to use the bananas as a side accompaniment. It’s too risky to incorporate into the entire dish, because then you wouldn’t be able to escape the taste of banana. So I turn it into a makeshift sour cream, adding ricotta cheese, milk and a little seasoning. I blended that into a savory banana frenzy and tasted it.  It’s on the plate, it’s a part of the dish, so I crossed my fingers and moved on. During the round, Alton came out holding a raw, whole potato and announced a ‘Hot Potato’ sabotage. Whoever paid the most for the potato was able to assign two chefs to continuously pass the potato back and forth so that the potato was never touching anything but one of their hands. THAT would throw a chef off for sure! I spent some money and won that darned potato! Assigning two chefs I just couldn’t wait to see go home; I felt I was playing great defense at this point. I returned to my station and started to tackle the hashtag pan.

The only real challenge with the hashtag pan was the egg.
Breakfast hash absolutely REQUIRES egg, so I tried a number of different things before I finally scrambled my eggs, seasoned them, poured them into a squirt bottle, and used a pastry brush to brush the egg on the hot pan to create ribbons of egg that I placed throughout the hash. SUCCESS! I was happy and ready for the tasting round. When Judge Simon came out, I wasn’t nervous; I was ready and wanted my turn to be over and done with. He somehow approved of my breakfast hash with ribbons of egg, charred cauliflower and banana sour cream! He mentioned the banana was odd and that wasn’t surprising at all but the point is he didn’t spit anything out! I was happy.

When it came down to the first elimination, I wasn’t sure. I didn’t think I was safe but I was also thinking about the other chefs, some didn’t season well, some didn’t use proper cooking techniques but I’m over here with banana sauce ripping those guys a part! Probably not a great idea! As it turned out, I wasn’t eliminated! I somehow convinced Simon’s palate that the banana wasn’t detrimental.

And just like that, I was on to round two!
When Chef Alton announced the southwest salad round, I was so excited! I instantly thought of adding beef, and I knew I was heading toward an amazing dish in just a few minutes. When I lived in California, any southwest salad I ever ate included roasted corn, red onion, cilantro, black beans, heavy cumin and avocado. That to me is a traditional southwest salad. So that was my shopping list while rushing around in that pantry! I grabbed spices, fresh avocado, cilantro, beautiful sweet corn, black beans and some awesome skirt steak. I was ready. The sabotage round started, and I was ready to spend money. 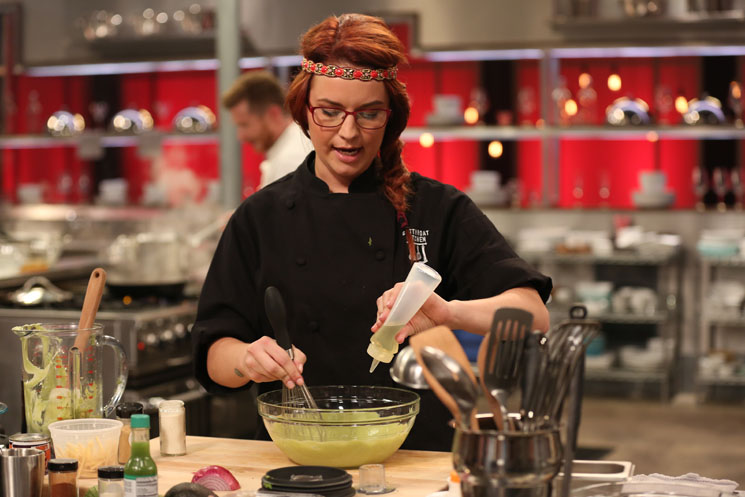 An exercise machine? Dehydrated food? HOW would you ever make those work?
I made sure neither of those sabotages came anywhere near me. I fought for that basket of dehydrated items, but I didn’t prevail. Chef Jovens, again, won the basket and by some miracle didn’t throw this one at me! Chef Matt was the sad victim and I saw my chance to swoop in and knock him out all together when they rolled out a giant stair-stepping machine. Cooking while actively exercising? No thank you. I bid and bid, and finally Chef Matt gave in. I was the winner of that machine and it was going straight to him. The sabotage round was over and somehow, I made it out alive. Time to cook!

I fly through my dish with ease and confidence. Before I was even plating the steak I was already planning for the next round in my head! Thinking about how my remaining $17,500 was going to be MINE by the end of the day. Chef Matt was sweating up a storm on that stair-stepper while trying to induce some sort of flavor into the basket of dehydrated nonsense. Chef Jovens was too quiet for me to think he had even a bit of confidence at the end of the line. I finished grilling my skirt steak with perfect grill marks just as Alton is counting down. The round is over and I look to my right to see a pile of purple, mushy cactus?

I’m golden at this point! Bring on the final round!
Judge Simon tasted my plate starting with the steak. He used adjectives like “absolutely perfect” and “delicious” — I was on cloud nine! When he moved on the other chefs, my mind went straight to the next round and I was planning my attack. But to my surprise, Simon’s eyes fix on me?! My stomach drops and I’m not sure what to do. Then I hear it.

Now it’s present day, I’m sitting in a crowded room with my family and closest friends, watching my episode of Cutthroat Kitchen on Food Network. My stomach is in knots and I can’t really sit still. I know that everyone in the room is set on me moving on to the final round because they think I knocked this out of the park! So as I sit and observe the crowd, I think back to the moment I was eliminated from the challenge and how I felt so defeated. OVER LETTUCE!

“I’m sorry Chef Ashley. Your dish was only missing one thing: LETTUCE!”
I felt like my brain exploded! I don’t remember walking over to Chef and handing in my remaining money — I was in total shock. I couldn’t believe that the lack of lettuce ruined my chances to move on! I lost to purple cactus goo! I was heartbroken. My hometown crowd went absolutely crazy — screaming they were shocked, and how could the best-looking dish be the one sent home for a technicality that the chef right beside me had as well. No lettuce. The crowd’s response was enough for me to take a deep breath and know that I was on my very best chef behavior that day.

Then I realized … my steak was cooked absolutely perfectly. My seasoning, throughout the entire competition, was spot on. I feel ok about it. I’m PROUD of how I performed, and I walked out with my head held high and a giant smile on my face. ‘Back to the basics’ worked!

And as far as lettuce goes, I won’t be eating it for a very long time.

One thought on “Lettuce Experience the Thrill of Competition”